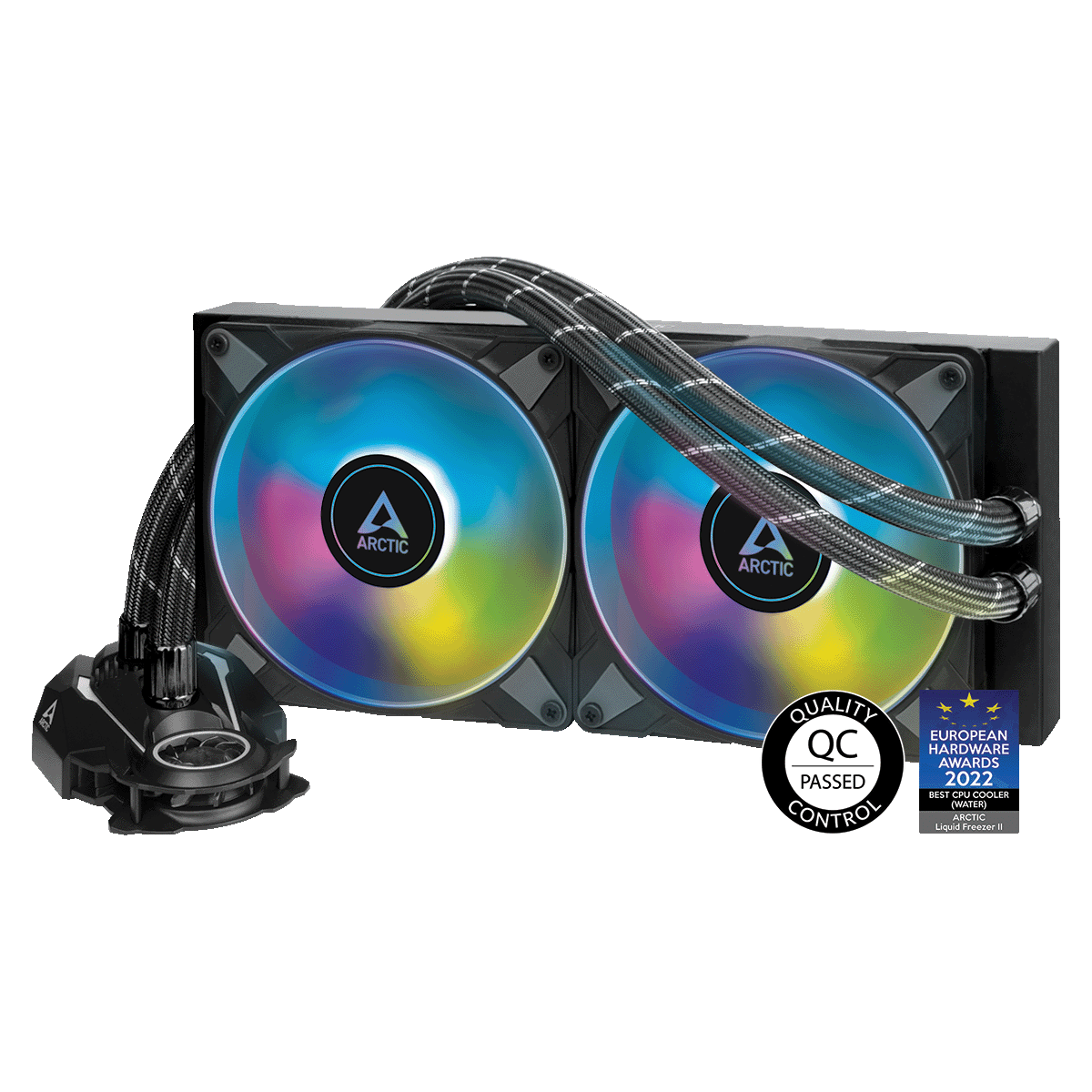 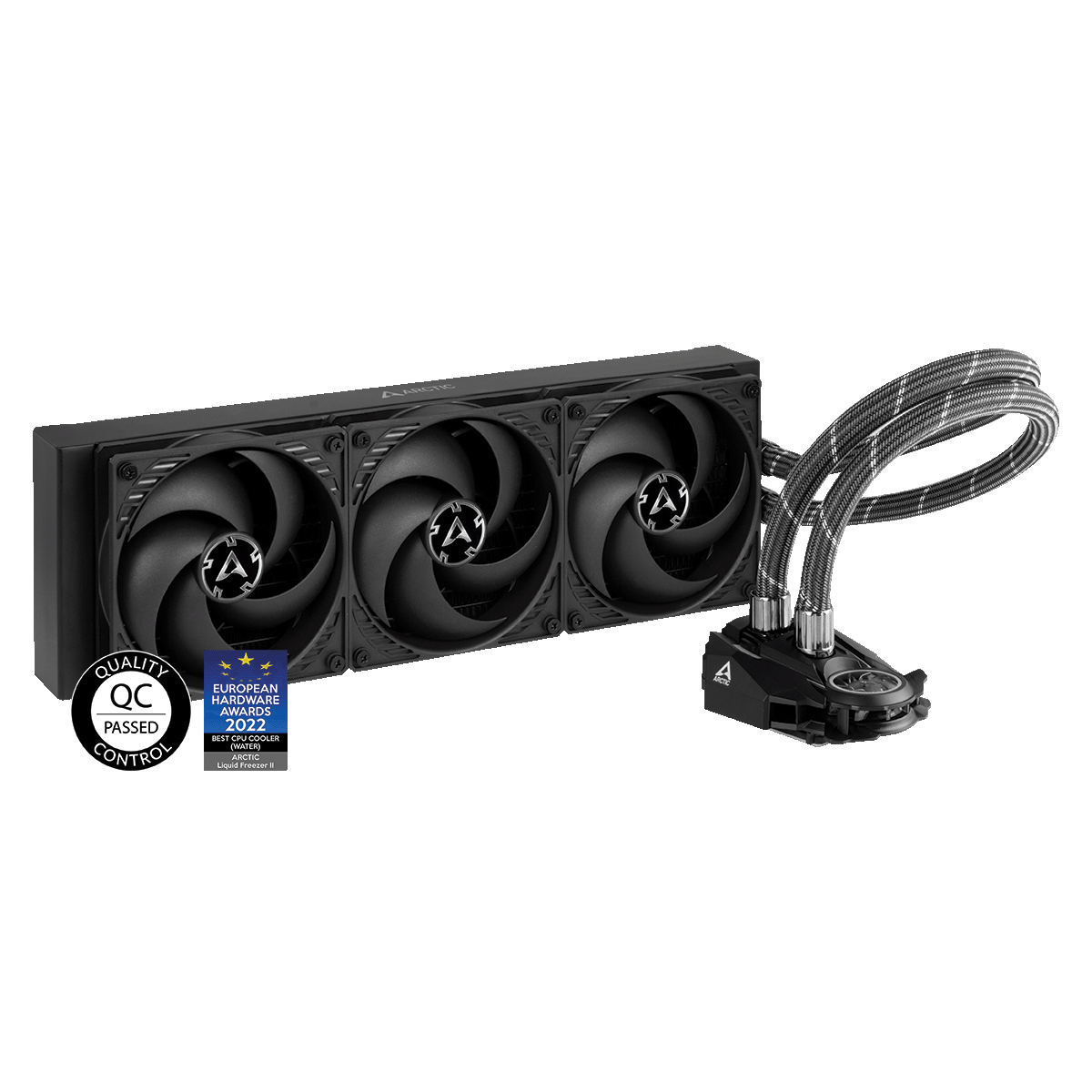 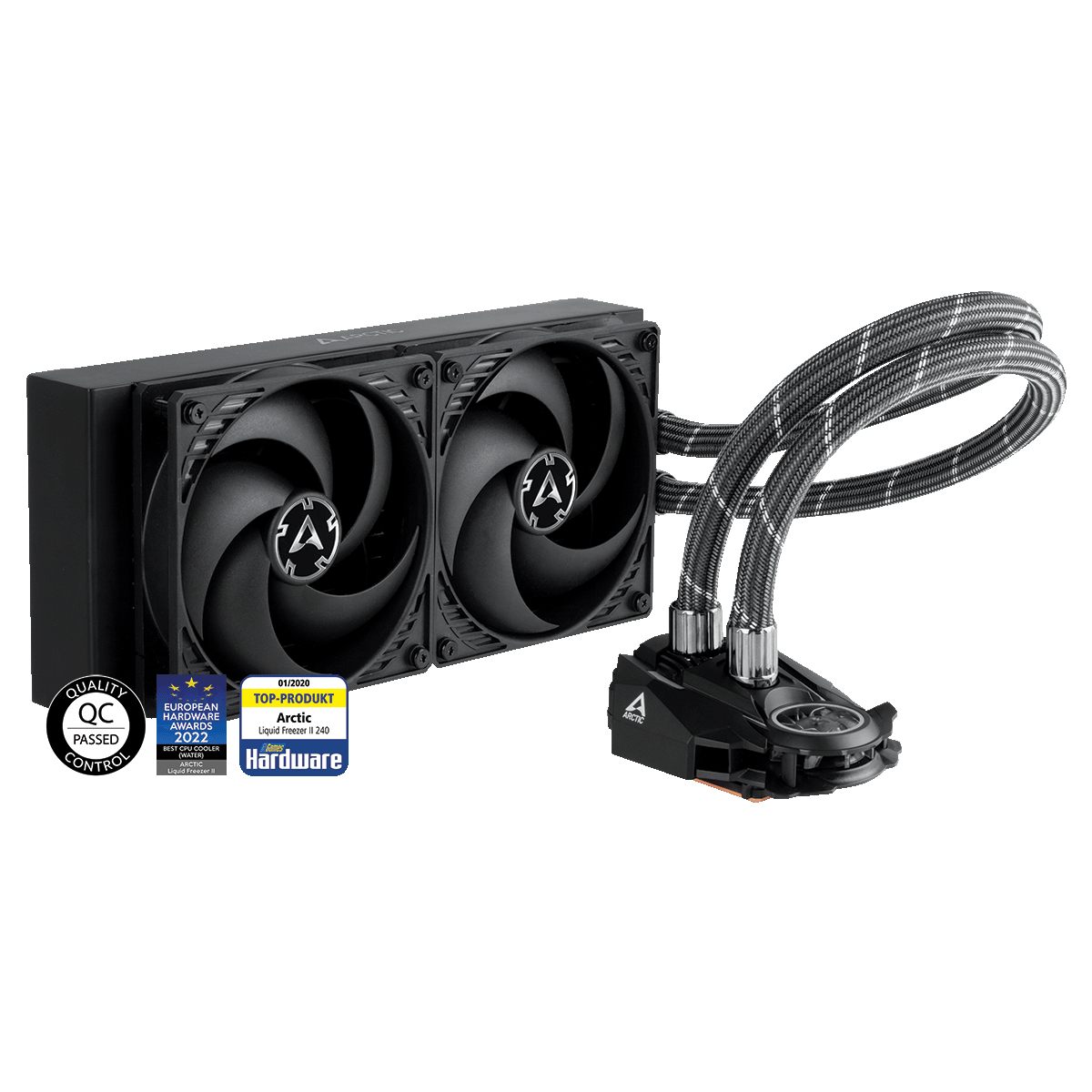 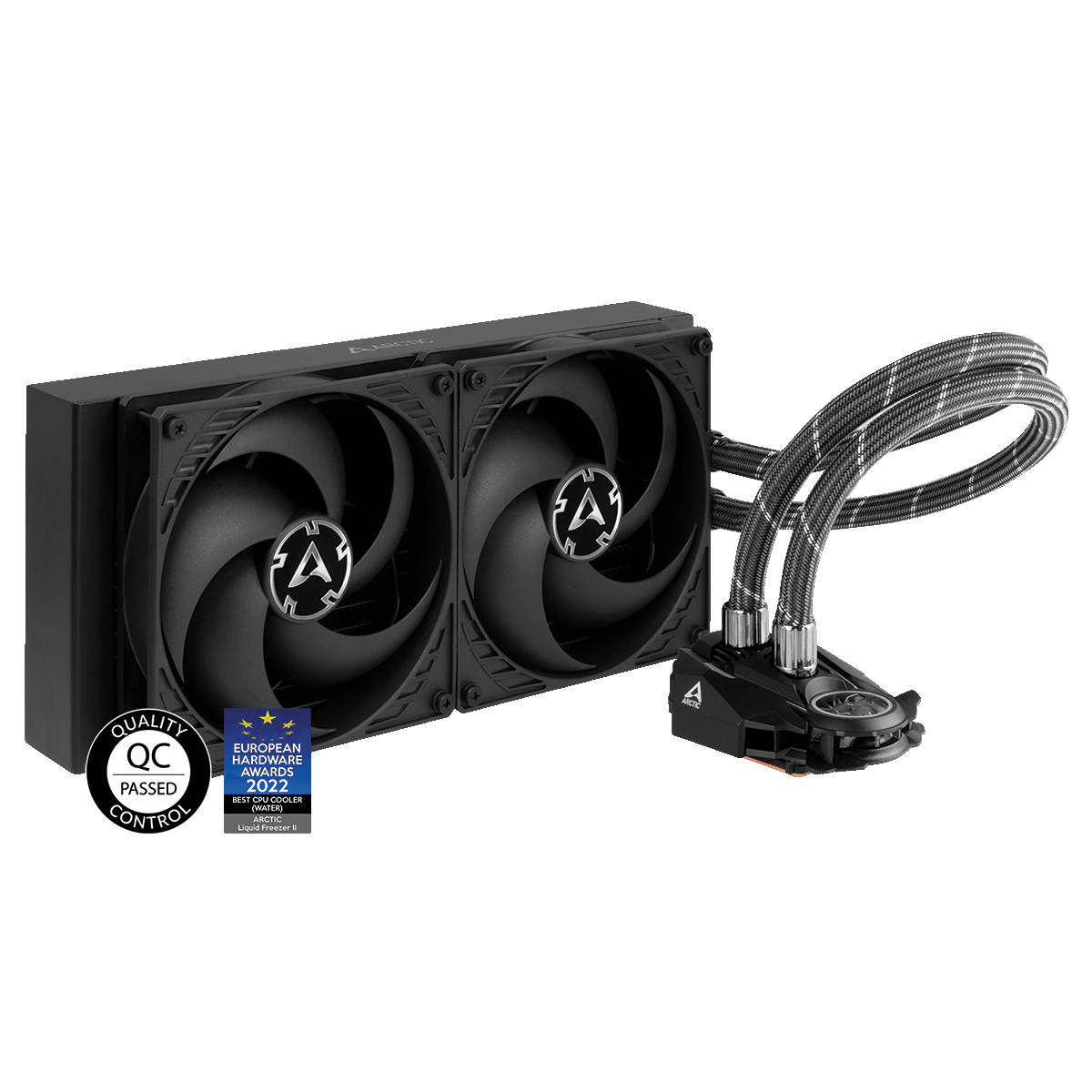 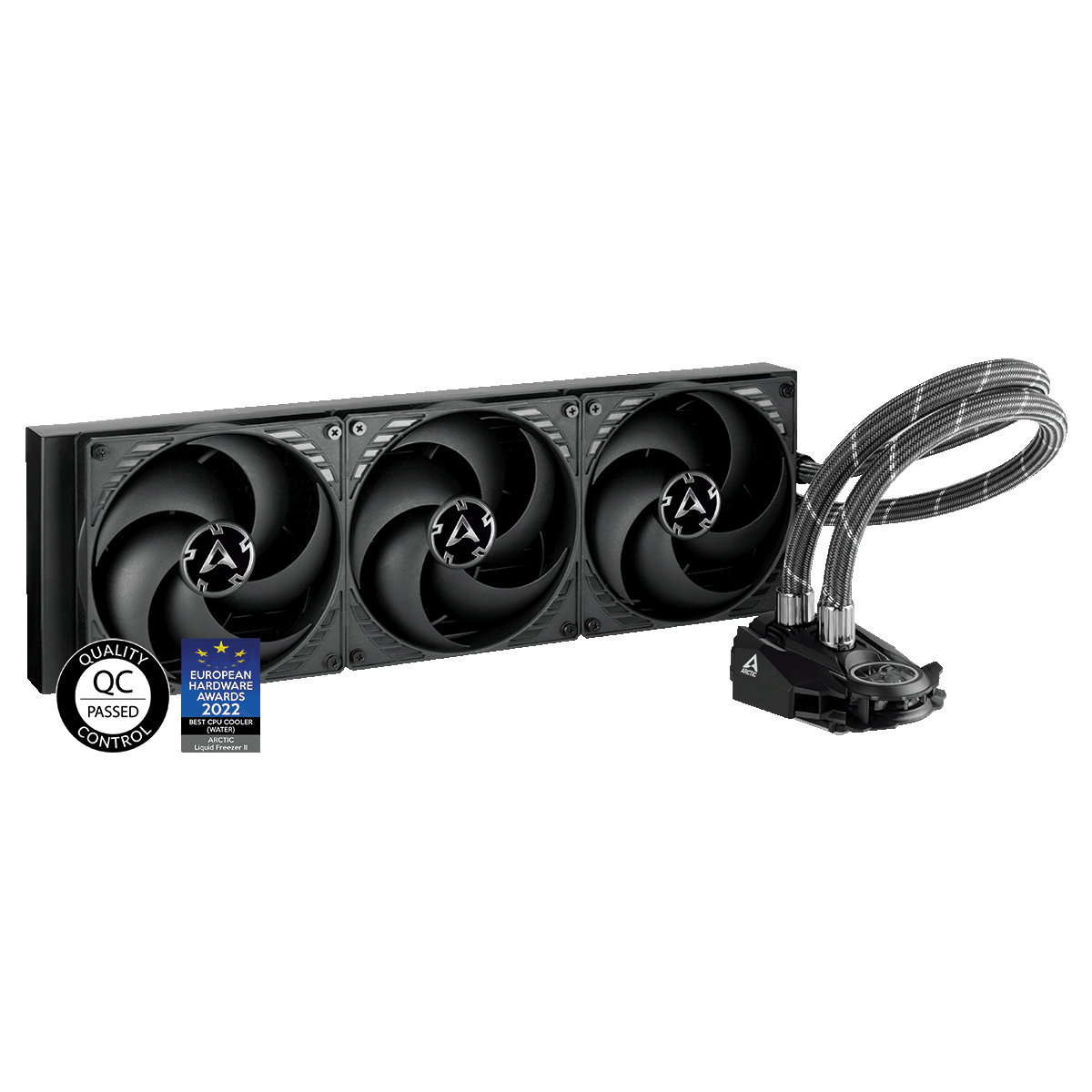 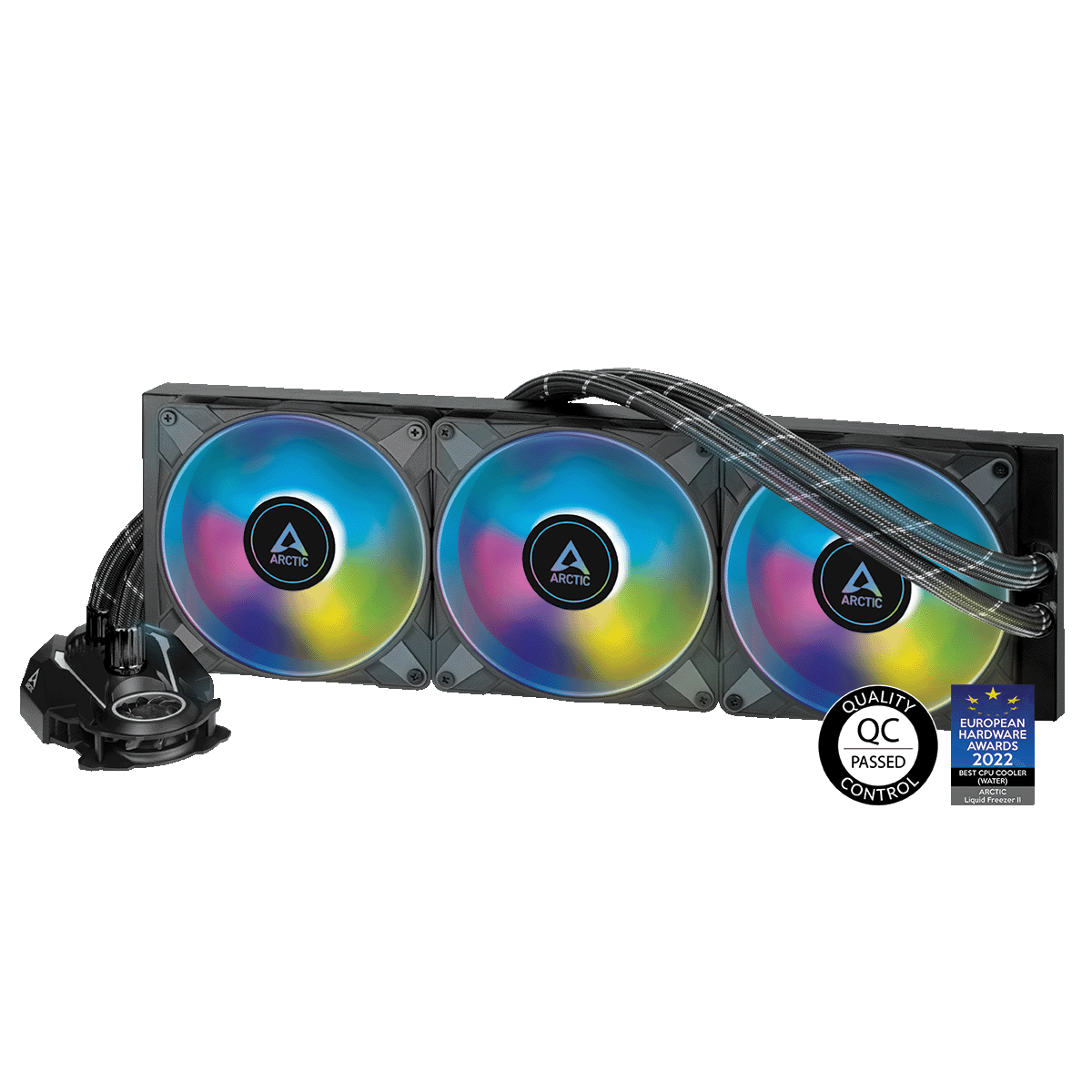 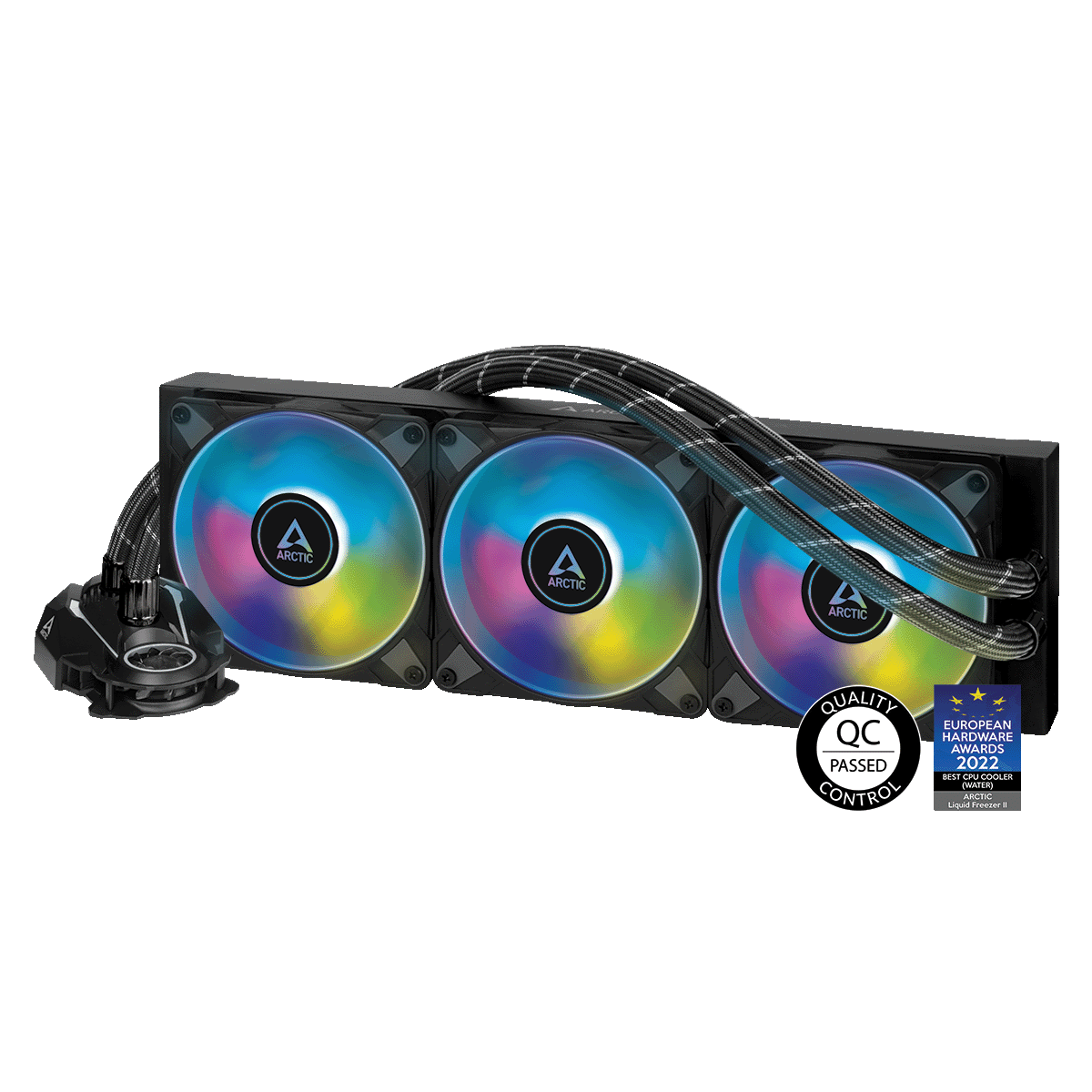 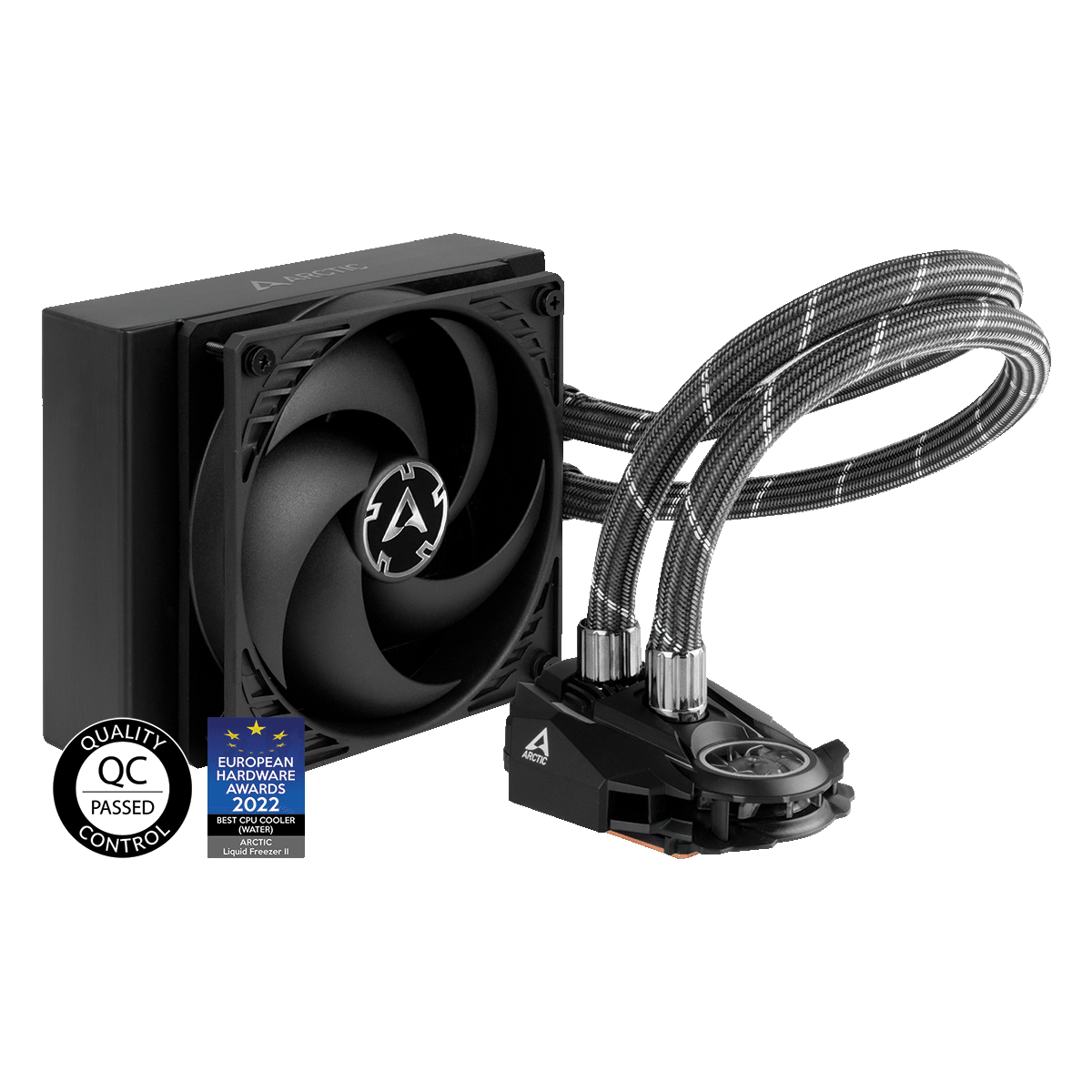 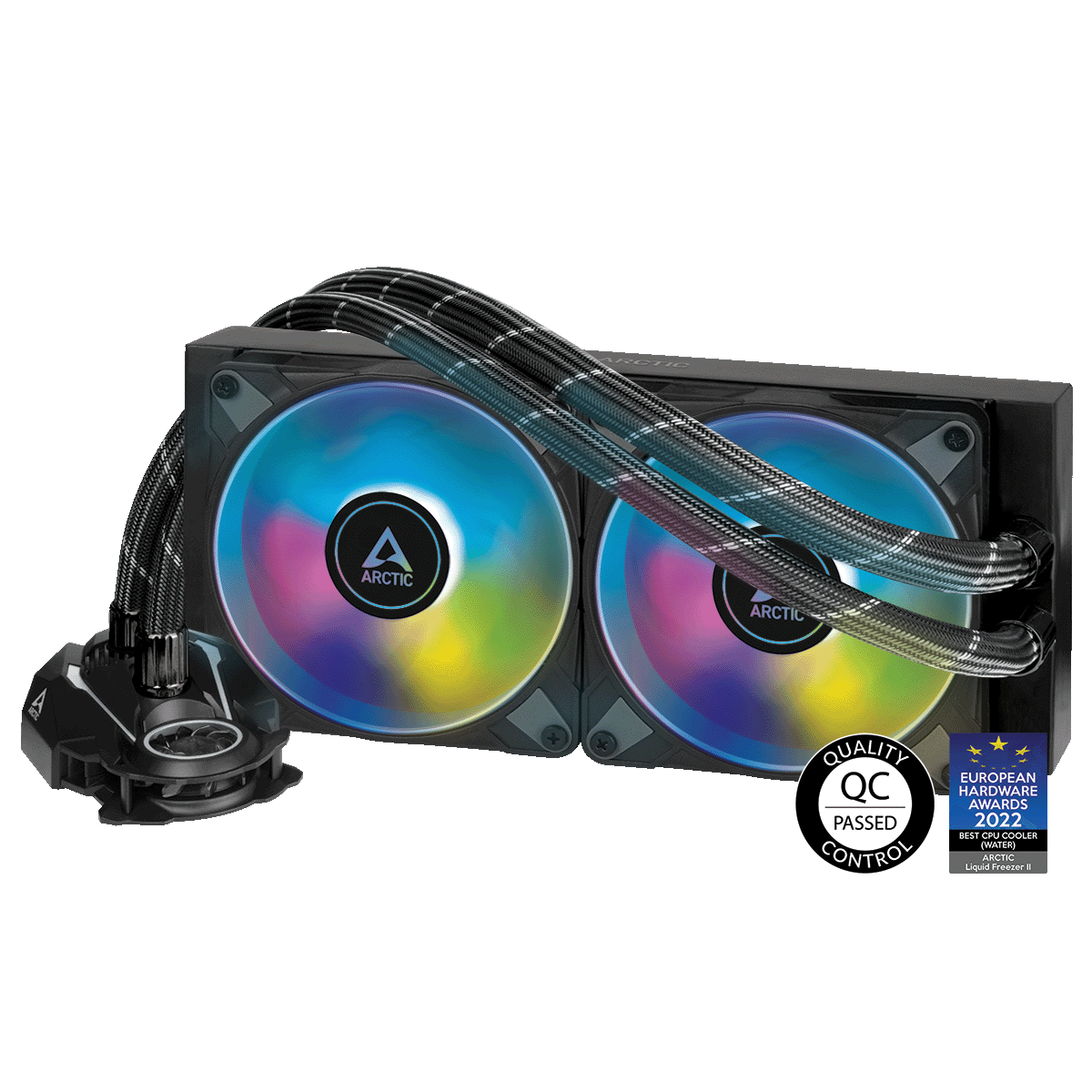 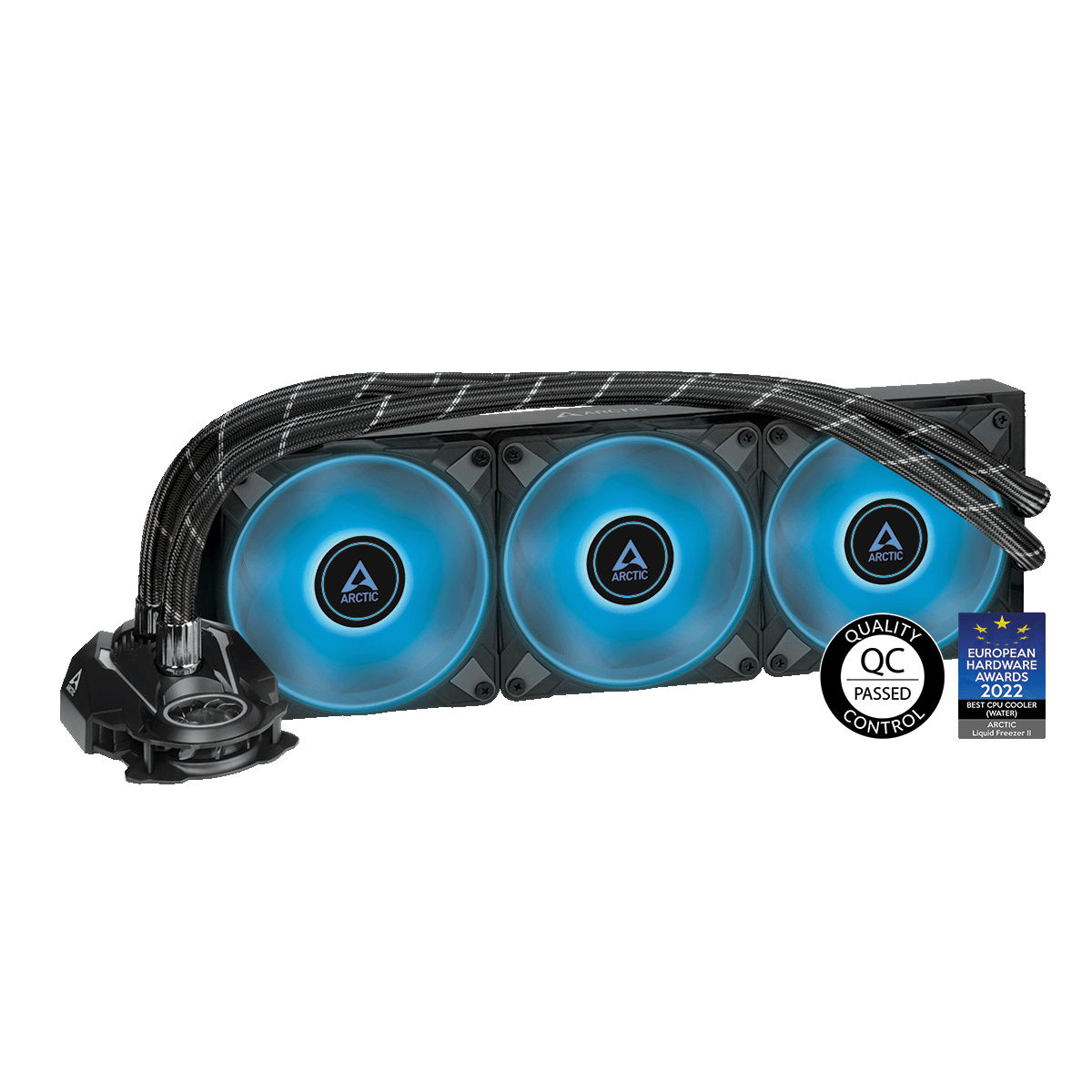 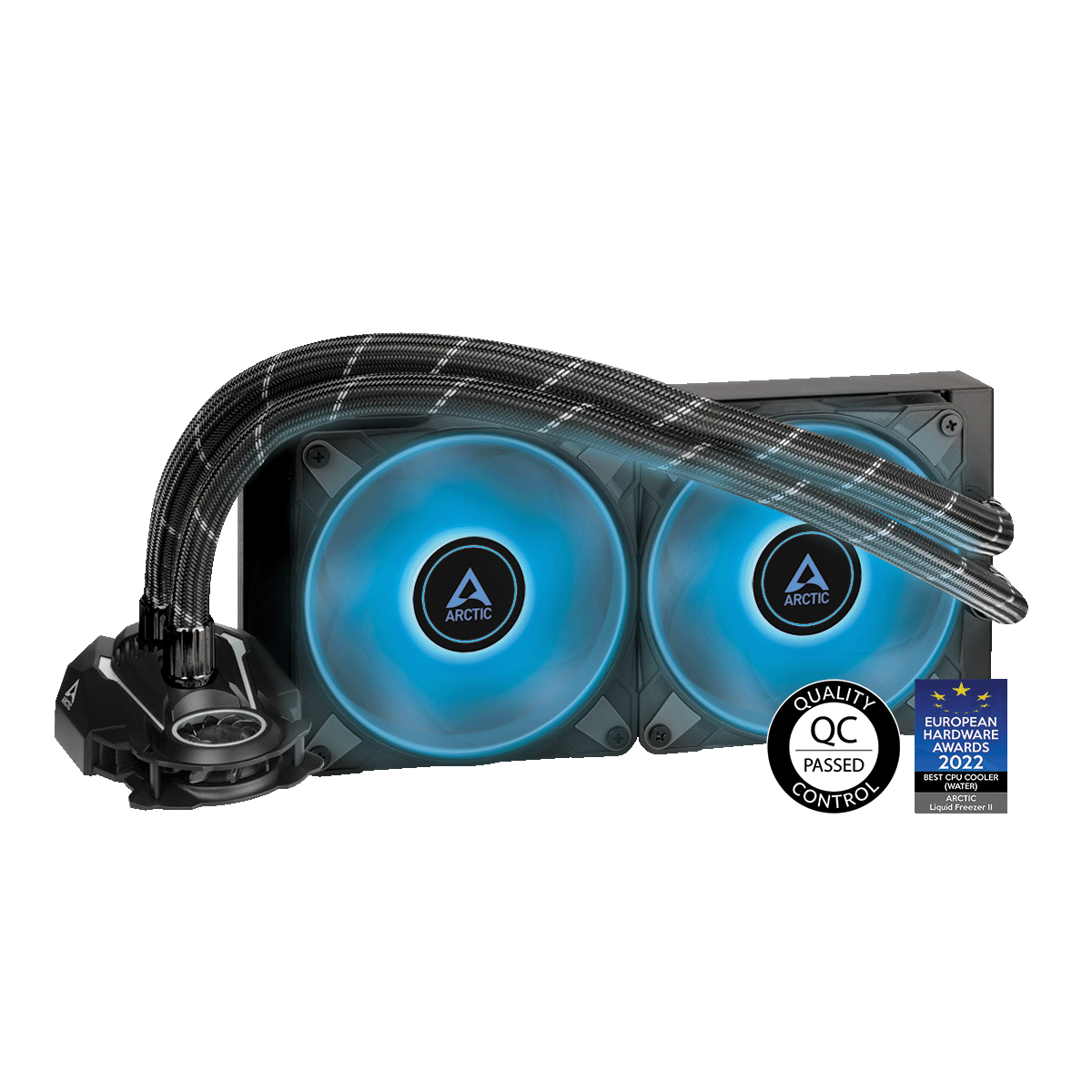 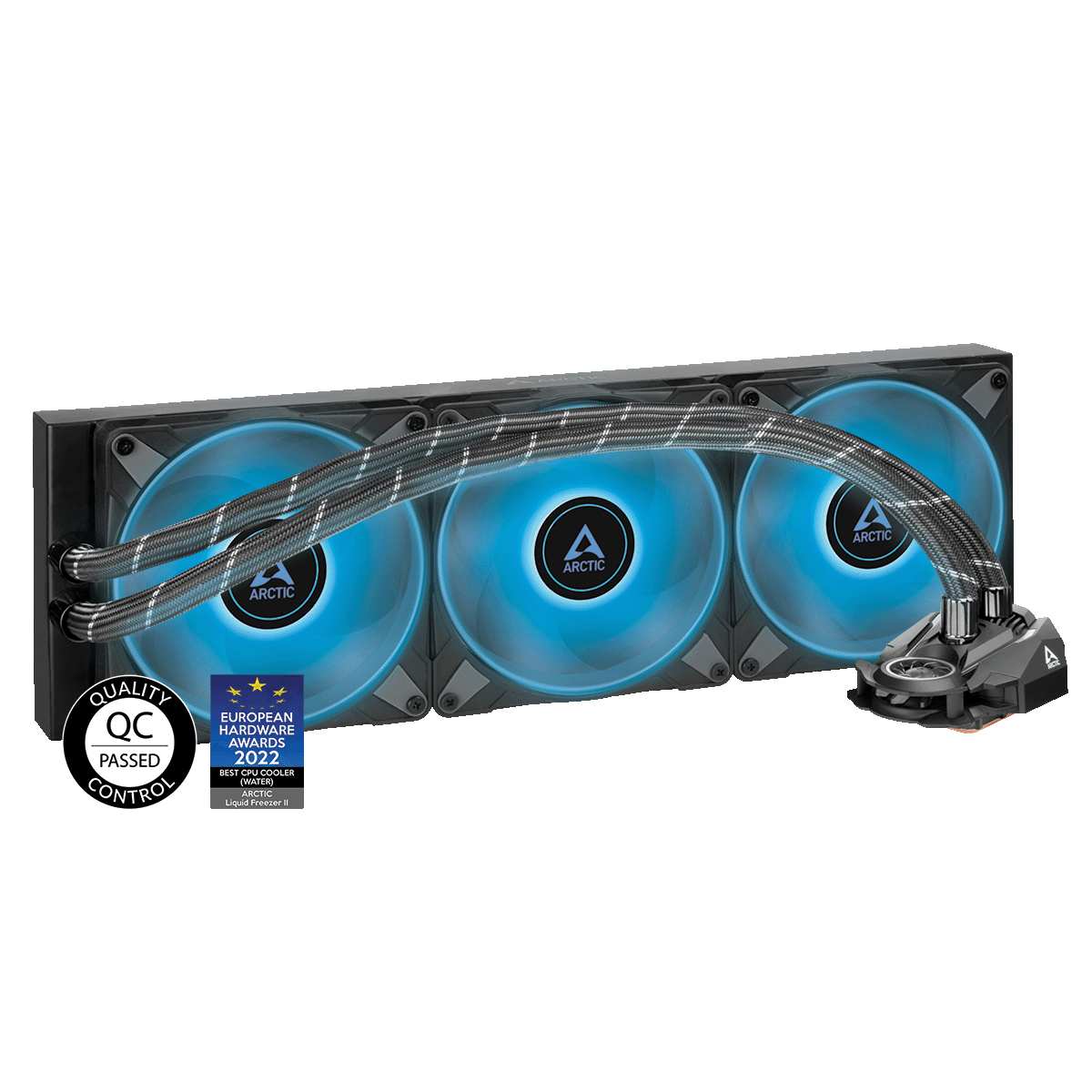 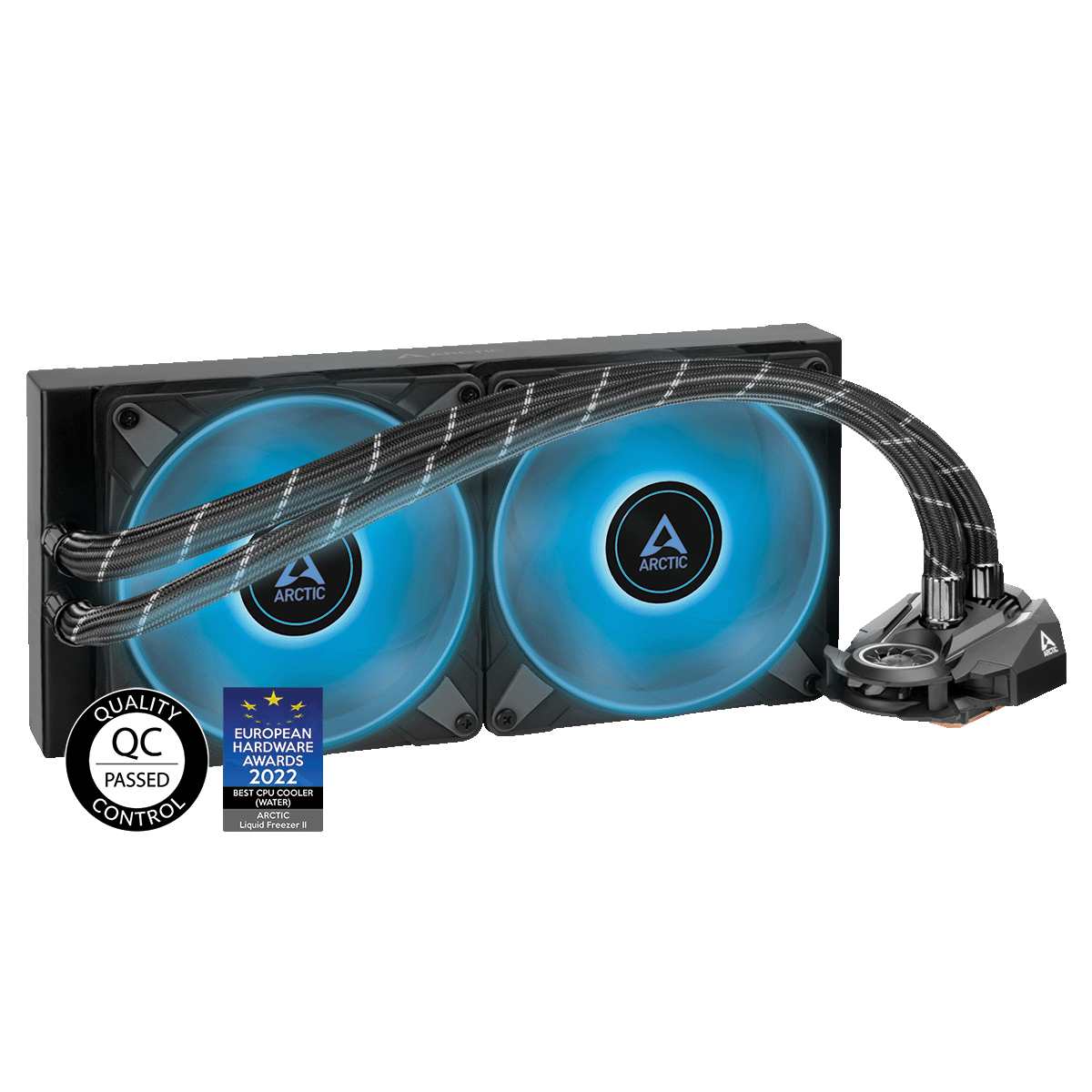 Water cooling with no compromises

1. Why should I choose a CPU water cooler?

2. How does a CPU water cooler work?

3. What types of water cooling systems are available?

4. How is a water cooler constructed?

5. What’s the best way to install a water cooler in a PC case?

6. Does a push-pull configuration make sense for radiators?

1. Why should I choose a CPU water cooler?

Thanks to their design, CPU water coolers can absorb and dissipate significantly more excess heat than CPU air coolers. Their excellent cooling qualities allow them to deliver low CPU temperatures, enabling far-reaching overclocking possibilities for processors while also having potential for silent operation. Water cooling systems are very popular among gamers and in work stations. The ARCTIC Liquid Freezer II is acclaimed by reviewers and enthusiasts worldwide and was awarded the test winner and best CPU water cooling in the 240-mm variant at the European Hardware Awards.

2. How does a CPU water cooler work?

A water cooler has a water circuit in which the coolant is moved by a pump. This can be a single component, or it can be installed directly on the CPU block, as it is in the case of an all-in-one water cooler. The CPU block itself is often made of copper and equipped with fine channels through which the coolant can flow. It is then passed through the so-called radiator (also called heat exchanger), where it is cooled down by generated airflow from the fans. To prevent corrosion and ensure durability, an alcohol-water mixture is often used as the coolant.

3. What kinds of water-cooling systems are available?

4. How is a water cooler constructed?

A water cooler consists of several parts, including a radiator, radiator fans, a CPU block with coldplate, and a pump.

A radiator is often also called a heat exchanger. Like an air cooler, it consists mainly of cooling fins to increase the surface area. Between the fins are flow channels through which the cooling liquid is directed. Several factors contribute to the efficiency of a radiator. Unlike most other all-in-one liquid cooling manufacturers, we rely on 38mm thick radiators with a high fin density. This allows a larger amount of water to be used in the circuit and significantly increases the cooling surface area.

Different fans can be used on the radiator. Generally, the higher the static pressure of fans, the better the cooling performance of the radiator. For water cooling, both push, pull and push-pull configurations are possible.

The cold plate is the part of the water-cooling system that comes in direct contact with the CPU and through which the coolant flows. Using special processes such as skiving, fine grooves are machined into the metal to increase the surface area. The coolant is directed through these channels and absorbs the excess heat from the CPU.

The pump circulates the coolant in the system. In an all-in-one water-cooling system like the Liquid Freezer II, the pump i soften located directly on the cold plate and forms a unit with it. With custom water-cooling systems, on the other hand, the pump is often combined with an expansion tank. This ensures that the system does not burst when the coolant expands under heat.

5. What’s the best way to install a water cooler in a PC case?

When installing a compact AiO water cooler, the most important thing is to ensure that the radiator’s hose openings are located below the pump unit. Otherwise, air can get to the pump over a longer period of time and cause noise or even impair its function.

6. Does a push-pull configuration make sense for radiators?

Depending on the thickness and fin density of the radiator, it may make sense to use additional radiator fans, such as the ARCTIC P12 PWM, which is optimized for static pressure, allowing the fan to be operated at low speed, and producing the same cooling performance with less noise.

The Liquid Freezer II series has high compatibility and is compatible with AMD’s popular AM4 and upcoming AM5 socket, as well as with modern Intel sockets like Alder Lake. ARCTIC thermal pastes, such as the MX-4, are the perfect complement for efficient heat transfer.